Defining the retirement need is not an exact science, and experts certainly do not agree as to the precise amount of money any one person should have for his or her retirement. Figures ranging from $500,000 to $2 million are frequently tossed about. But without any association to an individual’s specific circumstances or needs, these numbers are meaningless. For initial planning purposes, two methodologies are typically used to estimate future income requirements:
Replacement Ratio
Of the two methods, the replacement ratio is simpler. This approach simply applies a percentage of pre-retirement income to estimate how much one will need during retirement. These ratios typically range from 75 to 90 percent. In other words, the approach assumes that the income need during retirement will be 75 to 90 percent of one’s pre-retirement earnings, an amount that will produce a comparable standard of living. Applying the replacement ratio method to an individual currently earning $100,000 produces a projected retirement annual income need of $75,000 to $90,000 (in today’s dollars).
Projected Expenses
The projected expenses approach is more detailed than the replacement ratio, because it calculates the needed annual income according to current expenses on an item-by-item basis. For example, using this method, the annual cost of each of the following would be estimated:
The replacement ratio method is appropriate for younger individuals (those in their 20s or 30s) whose future expenditures or income levels are not known or cannot be reasonably estimated otherwise. For these individuals, a target estimate is sufficient. For older individuals (those who are close to or at their peak income levels, or those who are within 10 or 15 years of retirement), the projected expenses method is preferred. This method provides a more accurate picture of future income needs, because it is based on current expenditures. Also, changes or adjustments in one’s future cash outflow can be more accurately predicted using this method. For example, a couple within ten years of retirement will know whether they can pay off their mortgage.
Points to Remember When Creating a Retirement Budget
The following are important points to remember when creating a retirement budget:
The closer a client is to his or her retirement, the more precise the estimation of his or her income needs during this period should be. Those who are within a few years of retirement might want to take this a step further and estimate their income goals according to the varying phases of retirement: early, middle, and late.
Today’s Need, Tomorrow’s Dollars
Whether one uses a replacement ratio or develops a detailed retirement needs budget, estimating retirement income offers only a partial answer to the question “How much will I need?”

At this point, we simply have an indication of annual income expenditures and thus a target amount of desired annual income. But this target amount was calculated in terms of today’s dollars; it needs to be translated into tomorrow’s dollars. Taking into account the assumed rate of inflation, what will the income need be when you are ready to retire?
The answer to this question is simply a matter of calculating the future value, using the assumed rate of inflation and the number of years until you retire.
​
For example, let’s say Ted, age 47, is currently earning $70,000 a year. His estimate for the income need in retirement is 80 percent of his current income, or approximately $56,000. He plans to retire around the age of 62. Assuming an inflation rate of three percent over the next 15 years, Ted’s annual income need will be close to $86,000 when he retires. 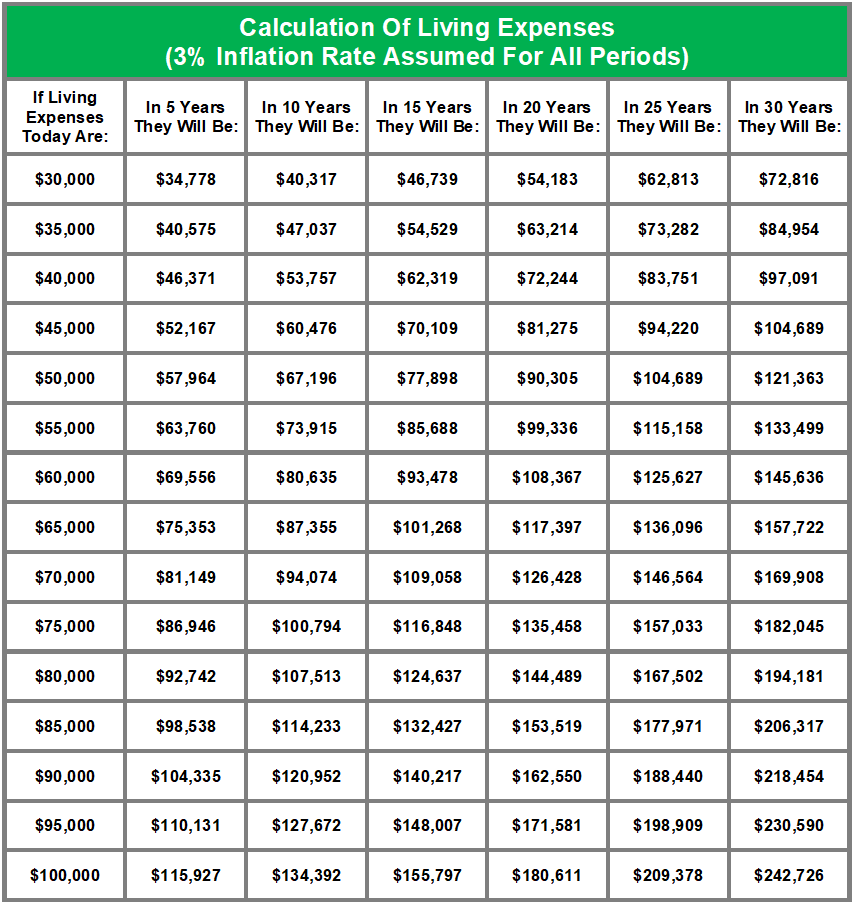 Once an annual income goal has been targeted and converted into future dollars, the next step is to apply the expected sources of income.